Viewing most recent comments · Next page · Previous page · First page · Last page
cianny1 year ago
Right off the bat, the game gave me this dark souls kinda vibe. the camera angles are also interesting, it kinda reminded me of ghost of tsushima.

I hope in the future updates I can hack and slash my way right through end lol.

Tried out the demo!

Reply
Tokio Lotus1 year ago(+1)(-1)
Very beautiful demo. I felt like I was playing a poetic version of dark souls. I was also surprised at the voice acting and designs.

Great work, I would love to play the full game!

So compelling and just beautiful! When can we expect more?

Amazing demo, hope the full game got a lot of story! Also try to fix the bug of the camera go in to the walls and see the void! Love the sounds and the atmosphere

Hey I played through the Demo twice and I just wanted to let you know that it was really freaking cool to play through, I loved how the game looked, the music went in hard, the atmosphere of the game was scary and calm at the same time, hearing ever step you make through the mud and hearing creepy things in the distance was terrifyingly awesome, the monsters at night were creepy. I wish the demo was longer and that you could fight the monsters with a weapon or even a shield, More npc please. I can't wait to see the full release of the game I wish you guys all the best! p.s. here is my gameplay

The graphics are truly amazing; i've never seen anything like this before. Really wonderful. Gameplay wise, there's not much here. A walking simulator more than a game. Still great, but I hope the final product is rich in story and atmosphere to compensate

But i can't PLAYYYYYYYYYYY ITTTT becuz its not web

this look's so fricking cooooooooool

Did you study film or drama? I ask because the cutscenes in this are beautifully done; the subtle animations, the timing, the angles - really beings an emotional weight rarely seen in games.

That said it was pretty hard to figure out what to do or what was going on in the game proper so you have some way to go. I'm tipping you 10 bucks because I want you to get there.

Amazing work! You managed to capture an amazing atmosphere, I didn't want to stop playing until the demo has ended.
I'm eager to play the full version once you're finished!

The intro reminded me of Soul Reaver. Loved it. Love the style and the ambience. Would love to see more! :)

Loved the demo! I did a video on it and gave a few thoughts on the game during it.

Very ambitious indeed! Good luck on finishing it. I don't really know how many people are on your team but with this level of detail (especially those animations <3) you will definitely need some more. Again Good luck!

also it somehow reminded me the game MediEvil, don't know if that was intentional  :)

It's clearly something unique and I'll follow the development of it. good luck on finishing it dude!

I am Blown Away, please make more.

Definitely into it, loving the visuals and animations. Would recommend maybe removing some of the walking at the beginning though, I was definitely starting to get tired of it before making camp. Just my opinion though.

I have a crash during startup on both the Win x64 and Win x86 versions of the game. Where can I send crash files?

Nevermind, it's an issue with Citrix not with your demo. Fixed and now I can play

The demo looked interesting, but it was just a walking simulator, sadly. 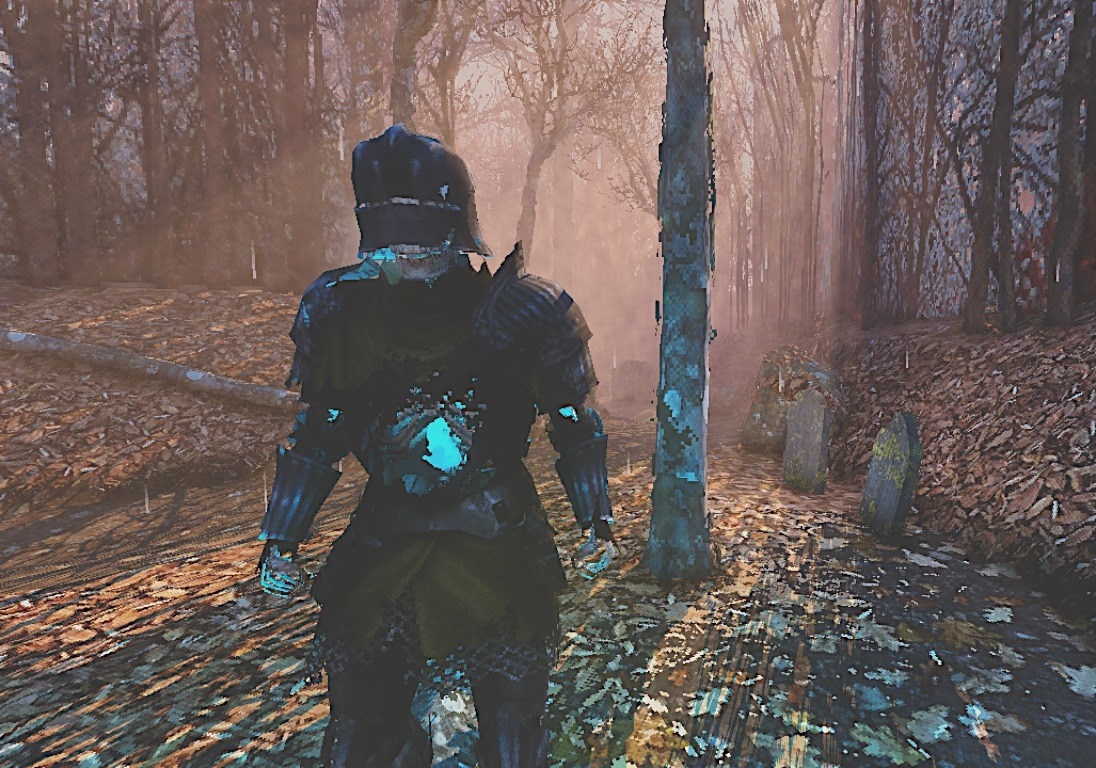 Reply
The Phenomenal Sir1 year ago(-1)

Hello! I recently completed a review of your game for my Youtube series “The First 15”! I’ve placed a link to the video down below, please check it out and get back to me if you'd be interested in letting me stream more of this title!

What is this shader called?

The effect on the shader is called Dither / dithering :)

Genuinly thought this was a cool game. kinda scared me at one point but I'm excited to see where the story goes!

Really liking the atmosphere, and I like the careful deliberate movement of the main character, it has a nice feel and feels accurate for someone wearing heavy armour. It feels like this has a lot of potential, and I'm interested to see where it's going. I also like the fact that despite being a knight it is not primarily combat based (in fact I didn't come across any combat, possibly I missed a combat encounter), and the lack of a weapon helps increase the feeling of dread.

Now for some criticism:

I think that the level design needs some tweaking. Initially once you leave the dungeon, you have a lot of different paths to choose from, but they all basically lead the same place, and there seems to be no benefit to exploring them all? Which then teaches the player that exploring is a bit of a waste of time, only to later find that there is a benefit to exploration as you can find more fireflies and interesting events, so you're giving players mixed messages.

For a game that seems to be promarily focused on exploring, it also feels weird to have such frequent and multiple points of no return for each section, which for me at least made me worry that I might not have explored everywhere. this might be the point, but personally I didn't find that uncertainty very fun? And it made me reluctant to want to retry the level to go back and find things I'd missed, especially as the lesson that I'd learned as a player early on was that sometimes exploring is a waste of time. Personally, I feel like these restrict exploring, rather than encourage it, so if exploration and finding out stuff about the state of the world is the purpose of the game then I would heavily recommend considering how your level design affects that.

(Also, the bit where you choose to make camp is unclear that making camp means you can't go back and continue to explore the rest of the paths.)

On a separate note, the introduction sequence also has some nice atmosphere, but I think that A) it needs a little bit of work on the character animation and B) given that the character faces aren't particularly expressive, having the main character open their helmet to show their face kinda works against the emotions that you're trying to instill in the viewer , so I'd recommend just keeping the helmet on. Let the bodylanguage and voiceacting do the heavy lifting there.

I'm sorry if this feels negative, but I do see a lot of potential in this game and I'm giving this feedback because I want to see it fix these things in order to live up to that potential

Absolutely stunning atmosphere, walking through that dark forest had me on the edge of my seat. Looking forward to keep playing this once it releases. One thing I noticed - while interacting with the skeleton leaning against the grave, I had a hard time reading the text because there was no contrast between the text and the ground. I had to guess on an option and accidentally died haha. Either way, keep up the amazing work :)

This is so, so awesome. Really unlike anything else out there. Incredible mood, visuals, story setup. I'm in love with this world. Can't wait to see where you take it!

Feels nice and unique. I really like the atmosphere, and I constantly felt the urge to explore and find out more. I was disappointed when I couldn't play any further, but I'm excited for the finished product. Great work so far, and I wish you a speedy development process free from bugs, unless they're the creepy crawly kind.

Hi, I tried to play your game, however with my Mac it would only show a purple screen. Clicking around, I realised I could play the game blindly, and I love the audio, but for some reason I can’t see the actual game. I tried it on different levels of graphics, but nothing’s worked so far.

This looks great! but the moment i'm given control, my character is spinning on himself (as in my camera). Not sure what to do, i'm playing on mouse and keyboard. Id love to come back to it as soon as that's fixed though!

I've heard this problem occurring for several people. If there is no gamepad involved, you can try deleting the game and unpacking it again to see if that helps. I'll be working on a fix in due time!

Thank you! I'll try that!

Reply
The Orange Ranger1 year ago(-1)

Travelling a maze to find my lost love. Check it out and subscribe! #theorangeranger #gaming #ofloveandeternity #itchio #youtube #powerrangers https://youtu.be/dpJ80JYFQUA